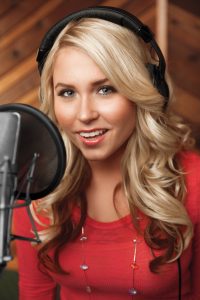 Spitfire and Tennessee native Rachel Holder owes her budding career, in part, to such musical influences as Dolly Parton, Lady Gaga and Nashville tunesmith Katrina Elam. In fact, the singer’s current single, “Lord Help Me,” is an Elam co-write, which also enlists the superstar power of Carrie Underwood and Ashley Monroe (of the Miranda Lambert-helmed trio Pistol Annies, now on hiatus). Possessing a four-octave range, Holder goes for the punches in a vocal performance that is in a masterclass all its own. However, her voice isn’t something she always had control over.

“It wasn’t until two years ago that I found out that I had a four-octave range. It’s definitely been a gradual process,” she tells NashvilleGab. “It keeps growing every single day. We keep working on it. It’s not like we hit four, and we’re done. It’s more like ‘hey, let’s go for five.’”

“I’m thankful God has blessed me with a beautiful talent, and I can share it with others,” she says. “I have a wonderful vocal coach. His name is Elmer Cole. We developed this. I like to call it the ‘monster,’ because I’m a big fan of Lady Gaga. [laughs] We developed this voice that over the past 10 years that’s unbelievable. I’m so blessed to be able to have a talent to use. I believe if God gives you a gift, get out there and use it.”

“Lord Help Me,” a rock-tinged anthem about falling in love, finds the singer certainly connecting to it on a personal level. “I grew up being like ‘oh my gosh, I’ve fallen in love and I really need help, Lord.’ [It’s really] the whole concept of the song [that drew me in],” Holder admits. “That’s how I feel. I’ve been in a relationship. So, when I was falling in love, I was just ‘ah, this is an awesome song because this is how I feel. One of these days, I’m probably going to get my heart broke and cry my eyes out.’ But, it’s like, everyone goes through that. Her ship is sinking farther and farther down, and she knows that she shouldn’t but does it anyway.”

Even with Underwood’s name attached to the project, Holder didn’t initially know the powerhouse had a hand in writing it. Holder explains, “A few years ago, I was working with some friends in Nashville, and they introduced me to [the song]. I put it aside; I know that sounds crazy. Usually when I hear a really good song I’m like ‘oh my gosh, I love that’ and go and do it right then. When we were looking for the new album, I came back to it four years later when I got signed with Curb. Before Curb, I was with an independent label, which was called All Entertainment. [They] helped me develop my style and help find who I really was as an artist before we even went to Curb with anything. When we started looking for the album, like I said, I came back to it and was like ‘why did I pass on the song in the beginning? What was I thinking?’”

She continues, “It wasn’t until I played softball with Carrie Underwood at the City of Hope Celebrity Softball game in Nashville at CMA Fest last year that I knew she was a co-writer on it. I’m a Katrina Elam fan. I love how she writes her stuff. I love how it’s so rangy. I’m always like ‘give me Katrina stuff.’ When I found out Carrie and Ashley Monroe were writers on it, I was just like ‘woah, that’s awesome!’”

“Because Carrie is a writer on it, everybody’s like ‘oh, that kind of sounds like Carrie Underwood.’ I’m like ‘you know, I think it sounds like Rachel Holder,’” she defends. “When I went to the studio, I had already put my own twist to it. I was like ‘hey, this is going to be Rachel’s sound.’ I believe my sound is different and unique unlike any other sound out there right now. [The song] came out the right way. I went in there with a clear mind and let it rip.”

On signing with Curb Records three years ago, Holder confesses that she is still riding high on cloud nine. “It was always one of my dreams to be with [them]. I know that sounds crazy, but I remember when I was younger looking at Leann Rimes’ records (because she’s one of my influences), and I would look at the back of her album and I would see that her dad produced her. I was like ‘how cool is that?’ In a way, it’s kind of a premonition.”

At a very early age, Holder showed a drive and passion for music, pursuing opportunities in Pigeon Forge. “I would go [there] to do shows there on Thursday, coming back on Sunday and going back to school on Monday,” she notes. “I did about 800 shows.”

The music almost came as a distraction from her academic life. “Growing up in school was really tough for me,” she recalls. “Everybody has that story: we’re singers, we’re different, people don’t like that. I went to a public school for five years. Then, my parents switched me over and put me in a private school. After that, in middle school, I went to sixth and seventh grade.Eighth grade year, I was homeschooled till my senior year.”

She elaborates, “People picked on me. They cut my hair. They poured paint on me. It got so bad that the dean had to tell them like ‘don’t talk to her or you’ll be in trouble.’ It was funny. It comes back around. If they hear my song on the radio here, they’re like ‘oh, let’s be friends now.’ I’m like ‘who are you?’”

As is rare these days, Holder is building upon her education by taking online classes for a business degree. “You’ve always got to have something you can fall back on, just in case something happens. Everybody’s got to have a backup plan. Also, it goes along great with the business I’m in. To be able to major in business and to be able to read contracts and be able to see the logistics of things and understand [everything], I mean, that’s what Dolly Parton does.”

Citing Parton’s “Jolene” as her favorite track, Holder is also in awe of the legend’s business skills. “She has the greatest strategies in the world. She thought ‘hey, I’m going to reach out to every kid that comes through a theme park and introduce them to my music from now to forever.’ How amazing is that? She’s so smart.”

Along with her passion for music, Holder is partnered with a No Texting & Driving campaign with the hope of changing (and saving) lives. She says, “I’ve had a lot of friends that lost their lives to it. I’ve known several that have even drove off a mountain before. Just seeing all these stories and hearing so much about this and seeing laws not being passed in certain states, our government needs to really crack down on this. This is affecting these kids, you know. It’s time to set the phone down. It’s not going to hurt you to set the phone down for thirty minutes.”

Currently, the budding 20-year-old, who previously released “In Your Arms” and “Five Days” to radio, has her sights set on her major label debut record and is even exploring her own songwriting for the project. “Lately, I’ve written with Bonnie Baker,” she says. “I have like journals full of songs. It just comes from the heart, you know. I’m not going to be selfish with my writing. I’m not one of those artists that’s like ‘hey, I’m going to write all my songs.’ We have songwriters, and I have my songs. Let’s compare. ‘What is the best song for right now? Is this song better than my song?’ I feel like sometimes, that’s why people have only one hit because they’re so [stuck] on making the money with their own songwriting.”

“When you’re really trying to make your platform grow, you’ve got to write a good song, a great song or a hit song,” she advises. Along with that, she adds that she has always been known to be one to book her own gigs, including several stints at sporting events performing the National Anthem, “I grew up in a business family. Sometimes my label is like ‘what did you just do?’ All people can say is no.”